I have been using Terraform for the last week or so to create some infrastructure and decided to bring that knowledge back to a problem that I and others suffer from – building environments for presentations, all for the sake of doing some learning.

HashiCorp Terraform enables you to safely and predictably create, change, and improve infrastructure. It is an open source tool that codifies APIs into declarative configuration files that can be shared amongst team members, treated as code, edited, reviewed, and versioned

This means that I can define my infrastructure as code. If I can do that then I can reliably do the same thing again and again, at work to create environments that have the same configuration or outside of work to repeatedly build the environment I need.

To understand how to build a thing the best place to start is the documentation https://www.terraform.io/docs . For an Azure SQL Db in the docs you will find a block of code that looks like this

If you read the code, you can see that there are key value pairs defining information about the resource that is being created. Anything inside a ${} is a dynamic reference. So

So I can put that code into a file (name it main.tf) and alter it with the values and “run Terraform” and what I want will be created. Lets take it a step further though because I want to be able to reuse this code. Instead of hard-coding all of the values I am going to use variables. I can do this by creating another file called variables.tf which looks like

You can find these files in my GitHub Repository here.

To deploy the code that I have written I need to download Terraform from https://www.terraform.io/downloads.html and then extract the exe to a folder in my PATH. (I chose C:\Windows). Then in Visual Studio Code I installed two extensions The Terraform Extension by Mikael Olenfalk which enables syntax highlighting and auto-completion for the tf files and the Azure Terraform extension. You will need also need Node.js from here.

I was then prompted to use Cloud Shell and a browser opened to login. Once I had logged in I waited until I saw this 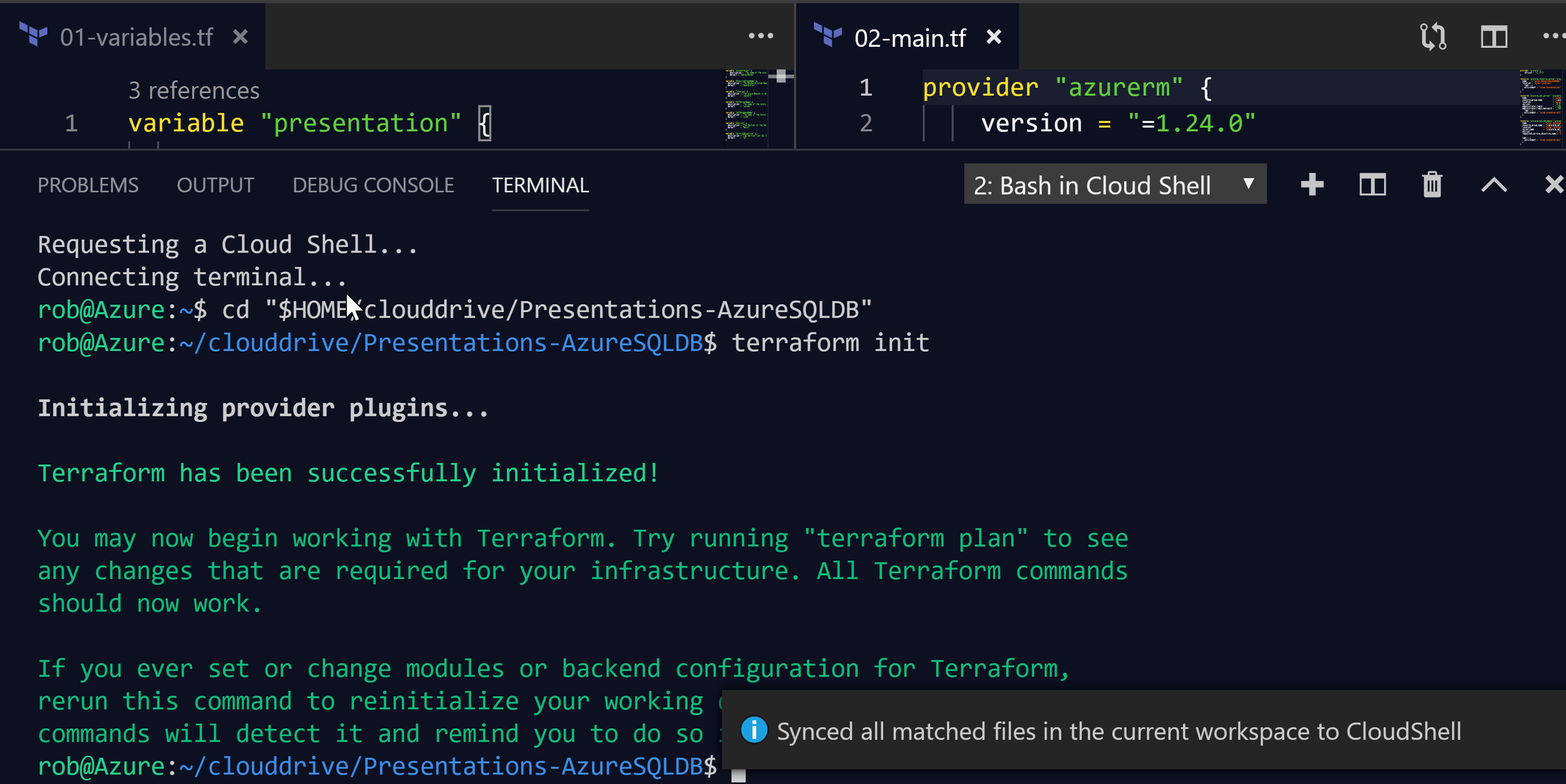 I press F1 again and this time choose Azure Terraform plan. This is going to show me what Terraform is going to do if it applies this configuration. 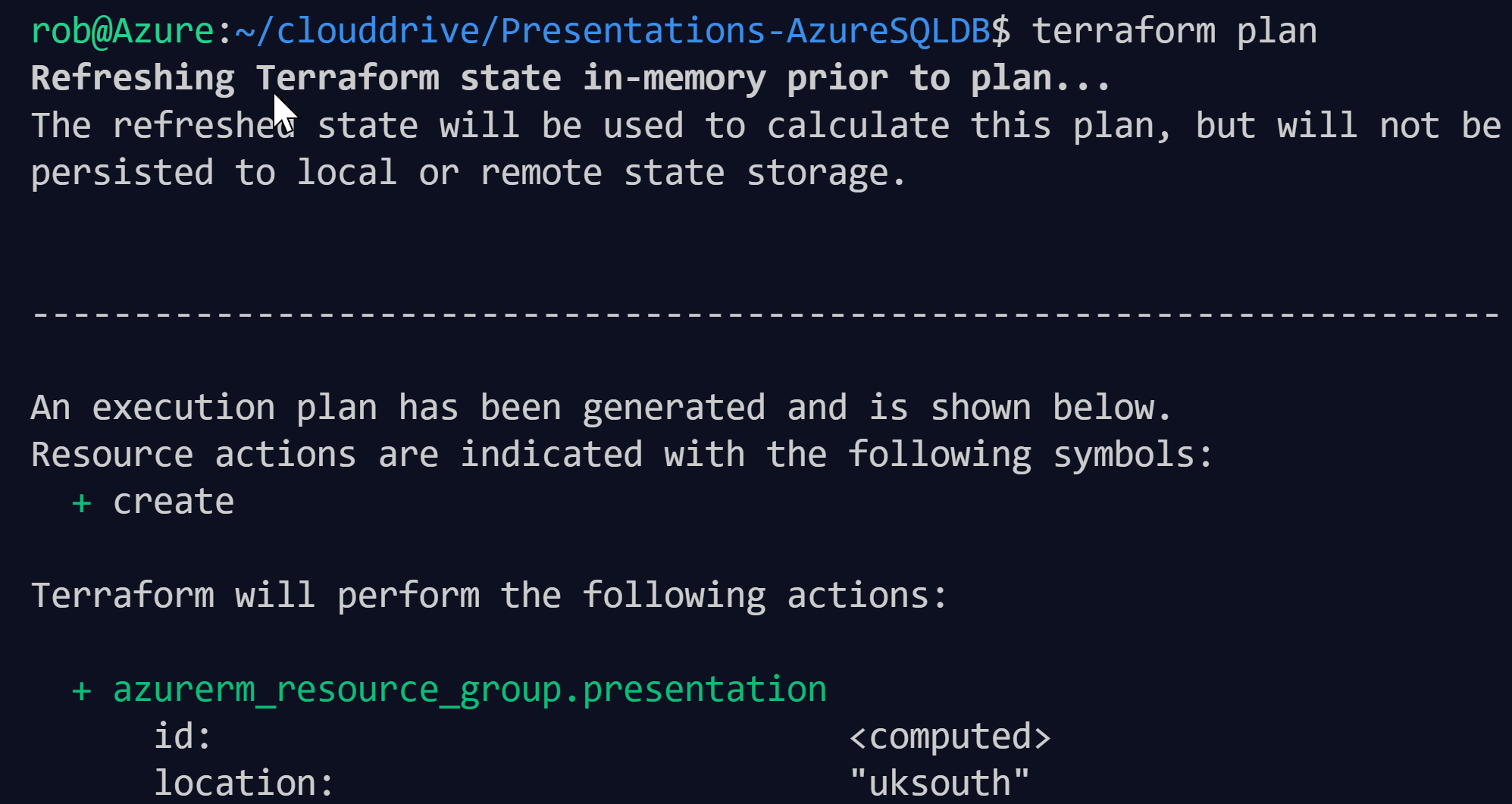 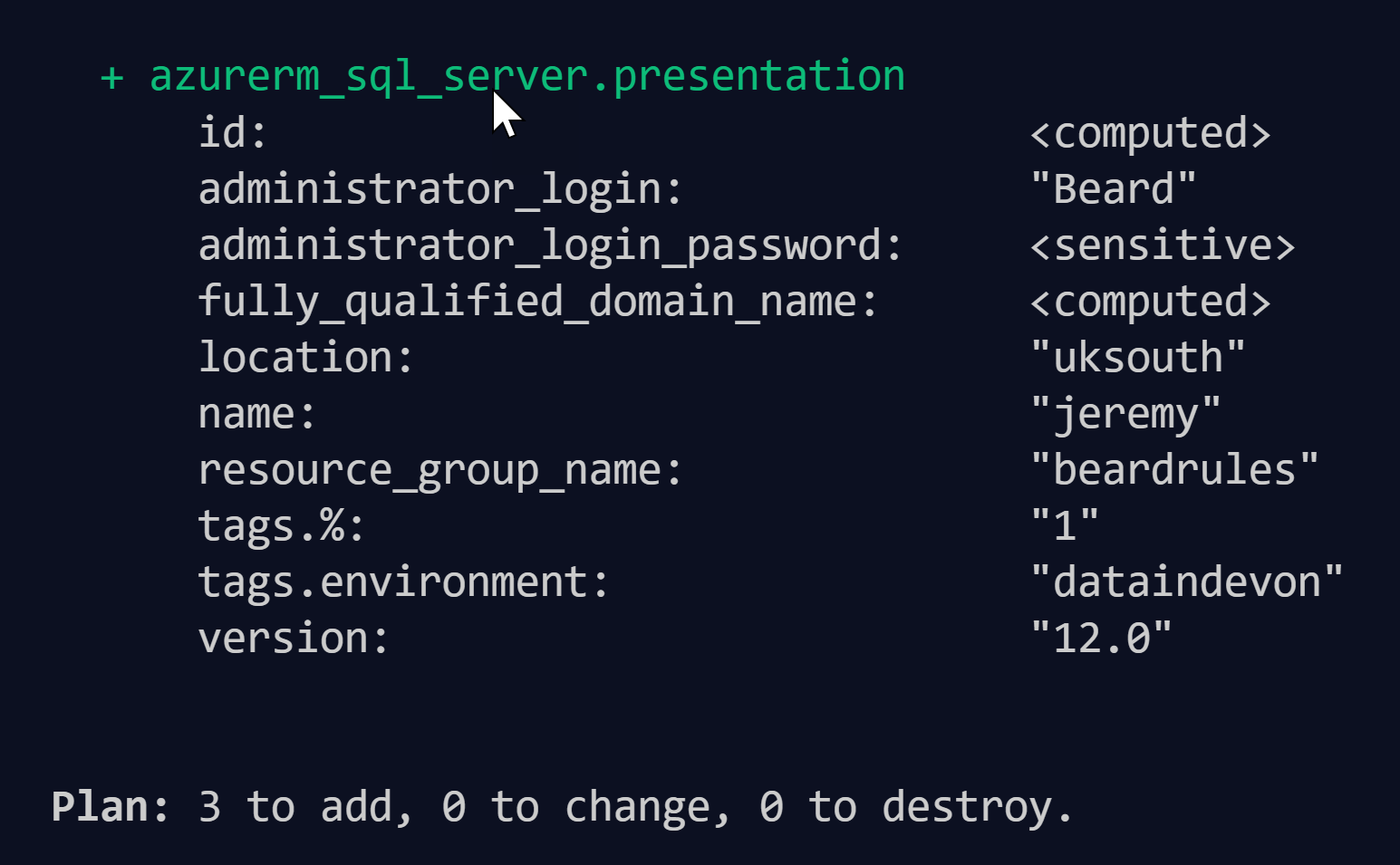 Once you have checked that the plan is what you want, press F1 again and choose Azure Terraform Apply

You are then asked to confirm that this is what you want. Only “yes” will be accepted. Then you will see the infrastructure being created

and a minute later

and Jeremy exists in the beardrules resource group

Then once I have finished with using the sqlinstance. I can press F1 again and choose Azure Terraform Destroy. Again there is a confirmation required.

and you will see the progress for 46 seconds

and all of the resources have gone.

Thats a good start. This enables me to create resources quickly and easily and keep the configuration for them safely in source control and easy to use.

In my next post I will create an Azure DevOps pipeline to deploy an AZure SQL Db withTerraform.