Every good DBA should have a DBA database. A place to store information about all of their instances and databases.

I have an InstanceList table which looks like this

I use this as the basis for all of my information gathering. By adding Server name, Instance Name , Port, Environment and Location to the table I use overnight Agent jobs to run PowerShell scripts to gather information about all of the instances. This way the information is dynamic and gathered from the server, so when we add RAM and change Max memory this is updated the next time the script runs. You can also automate your installation and decommission procedures (using PowerShell scripts) to add the information to the DBA database automatically

Recently I have received a lot of requests for information from various sources, auditors asking about encryption and backup policies, Project managers asking about database and sql versions, compliance asking about numbers of Windows 2003 servers or SQL 2005 servers, system teams asking which serves in a particular location can be turned off at which time dependant on which system they are supporting for a power down

Before we had the DBA database holding all of the information about the instances we would have struggled to be able to compile this information and when I saw Power Bi was released to GA I thought that it would be a good place to start to learn about it. By using data that I understood and answering questions that I knew the format of the answer I could be more confident about experimenting - ie. if I know I have 100 servers then any result for servers that exceeds that is incorrect

I have never been a BI guy, I claim no expertise in the correct methods of manipulating the data. There may very well be better methods of achieving these results and if there please feel free to comment below so that I can improve my knowledge and keep on learning

All data shown in the examples below has been generated from real-life data but all identifiable data has been altered or removed. I have no servers in Bolton, it is where I am from originally!!

I downloaded Power BI Desktop from powerbi.com and ran the installer and the first screen you see is this one

I then clicked on Get Data 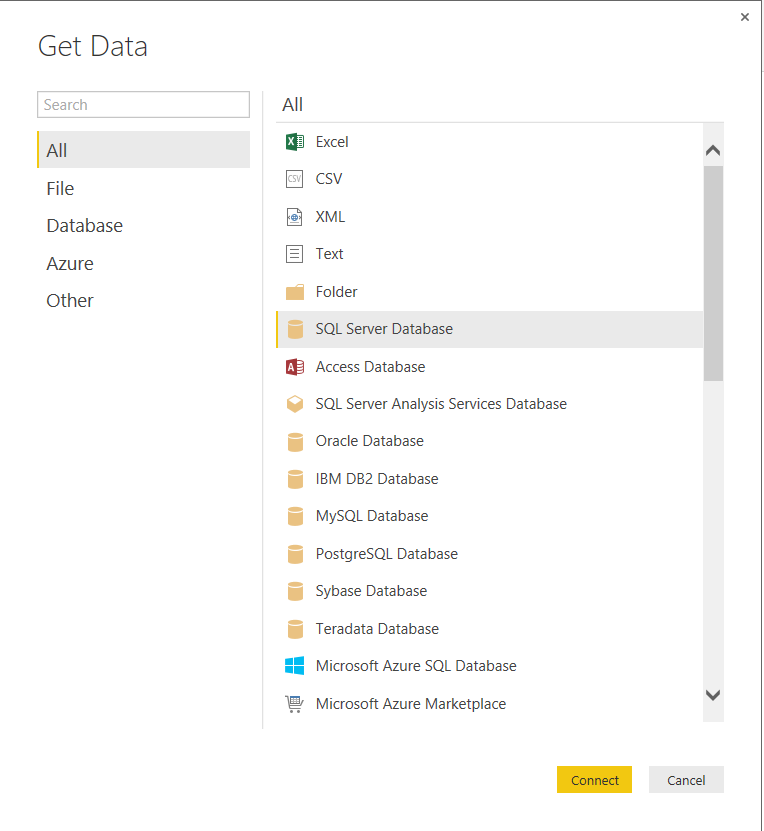 I used my current Windows credentials

It then asked me which tables I wanted to load so I said all of them :-) 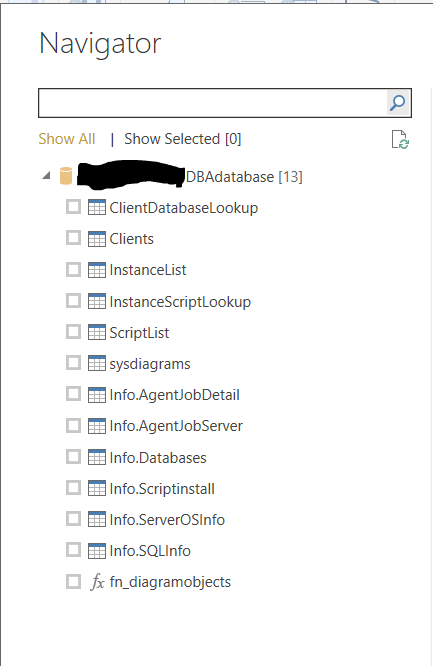 Once I had loaded the data I looked at the queries and renamed some of the columns to make more sense to me. I also created some calculated columns by clicking New Column

I created a relative date column using this code from Chris Webb http://blog.crossjoin.co.uk/2013/01/24/building-relative-date-reports-in-powerpivot/

This will enable me to show data for the last day

I also did the same for days of the week

Then I started to play with the data.

This is probably not how a professional would phrase it but I would say that if you don’t know how to use a new application be brave and give it a try.

OBVIOUSLY you are a PROFESSIONAL DBA and will not do anything that would endanger production, use a backup of your database and work locally if you need to.

The first thing I wanted to know was how many servers I had by operating system, how many by SQL version and the location of them so that I could answer the questions I had been asked. I had already written a query to get the correct information to give to the requestors so I knew the correct answers which was also an advantage. I did this like this

I then changed the ServerName values to Count 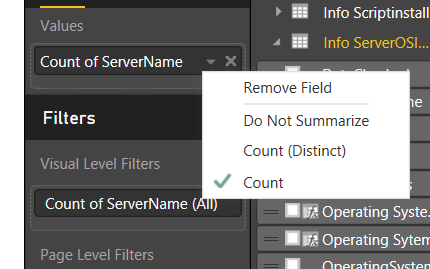 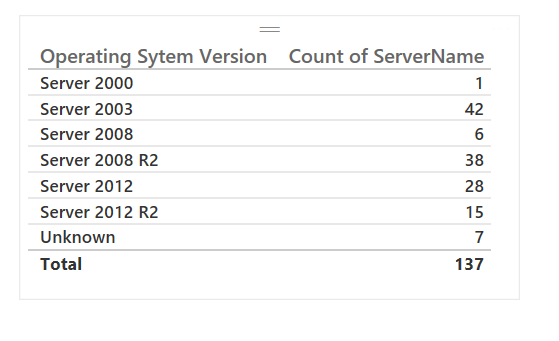 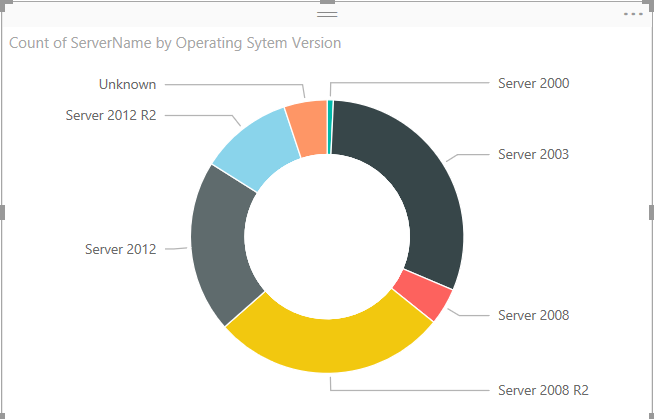 So you can quickly see how you want the data displayed

I then decided to look at the number of SQL 2005 instances that I had and as I had relationships between SQLInfo and Instancelist and Clients I could build a more dynamic report.

Now it starts getting really useful. If I want to know how many SQL 2005 instances I have I simply click on SQL2005 in the donut chart and the rest of the report changes

This is very cool and I hope you can see how useful this could be and how brilliant it would be to enable relevant people within the organisation the ability to look at that report and answer their own questions.

Lets take it to the next step. I have a location column in the InstanceList table which comprises of town names. If I choose a map and drag that column to the Location field and set Values and Color Saturation to the Count of InstanceID 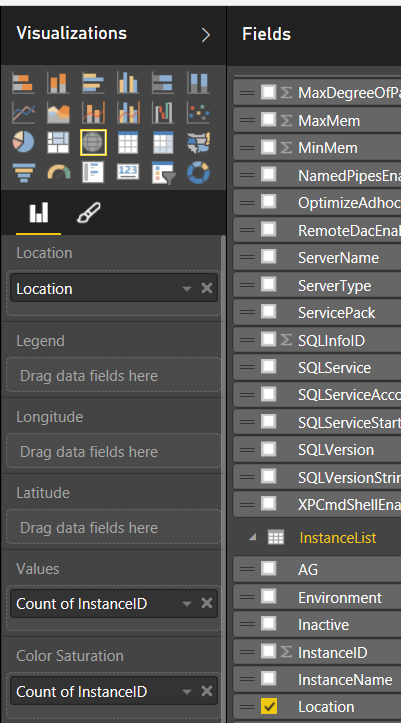 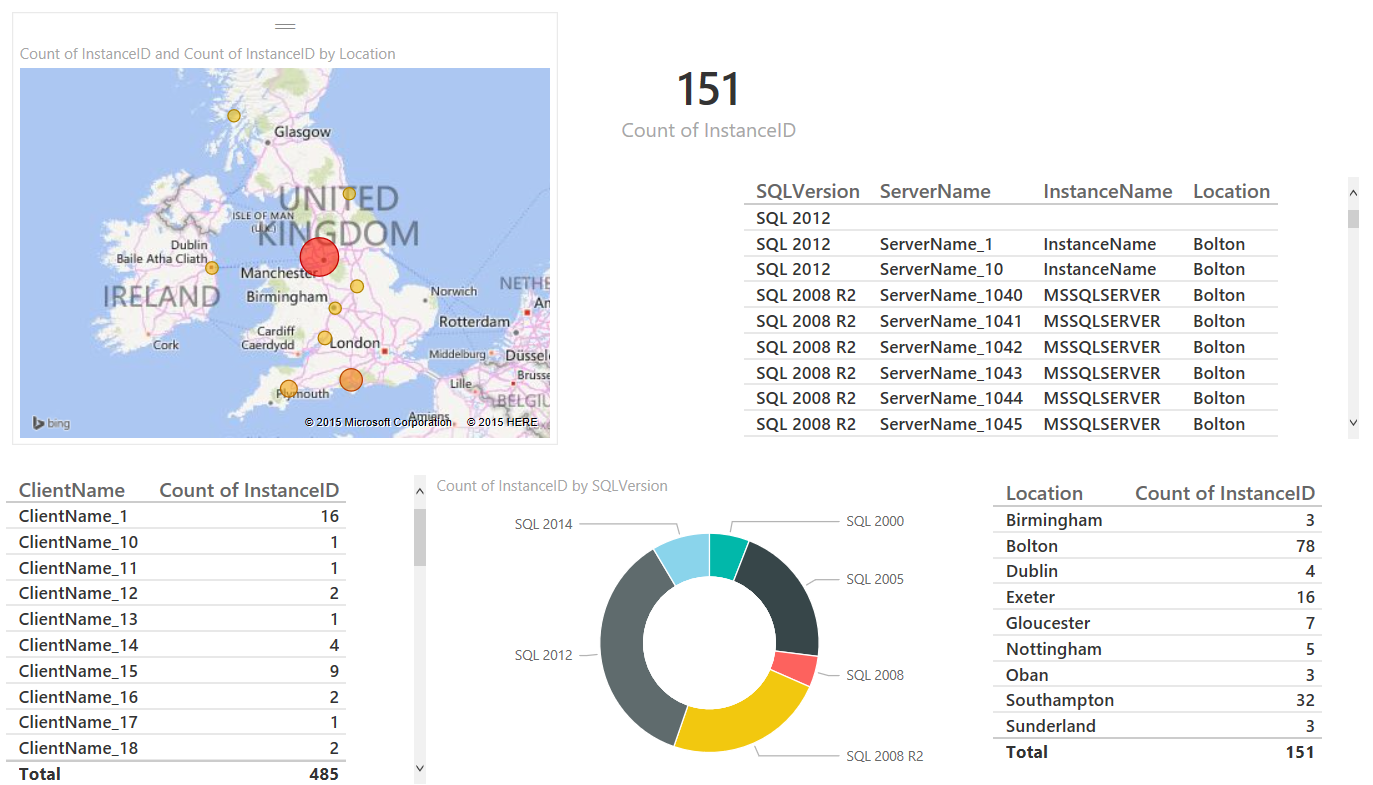 Look at how it dynamically changes as you click on the data labels - This is very cool and makes me smile every time!! I altered the colour saturation colours to make it easier to see. Now if I am asked about SQL 2005 servers I can quickly click on SQL 2005 and 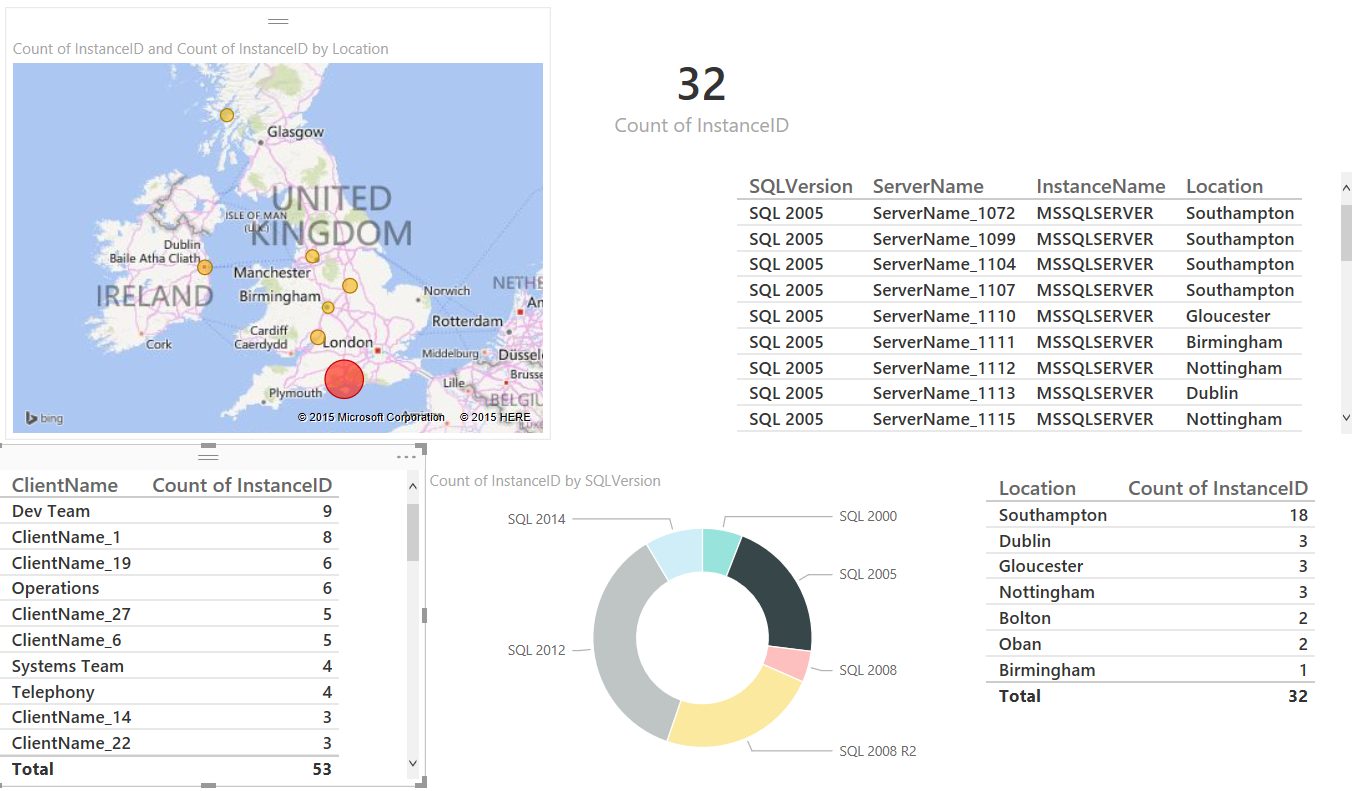 I can see that there are 32 instances, most are in Southampton, and which clients they support 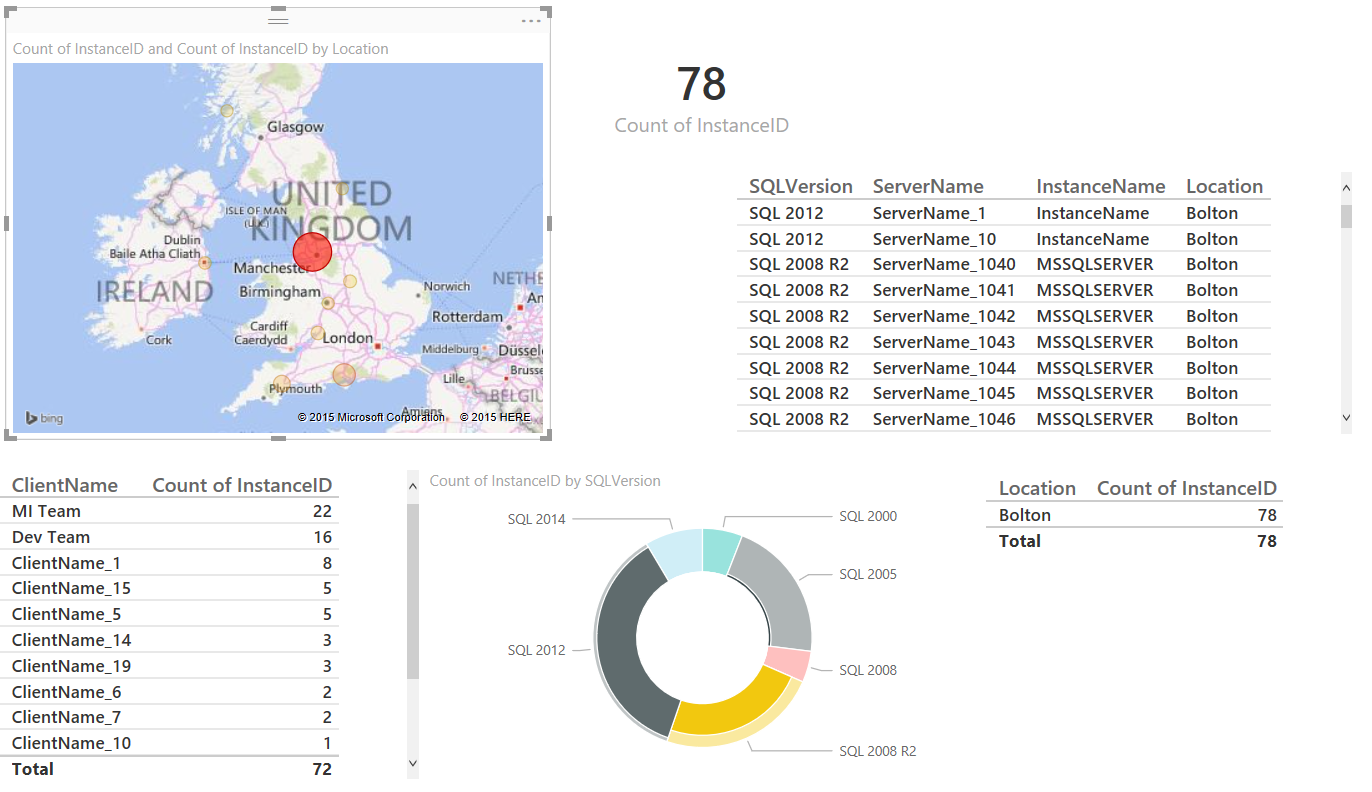 So you can simply pass the report file to your colleagues to enable them to use it or you can publish it to Powerbi.com. I am not going to go into any detail about the costs or licensing etc I will just say it is as easy as clicking publish. If you wish to have the information automatically refreshed there are some more steps that you would need to go through which are detailed here which enable you to connect your on-premise database to Powerbi using the data management gateway, alternatively you can simply refresh the data in the report and then publish it and replace the existing report.

Once the report is in powerbi.com you can enable Q and A on the data. This is some kind of supernatural mystical magical query language which enables you to query your data with natural language and will alter the results as you type and even cope with (deliberate for screenshot) spelling mistakes :-) 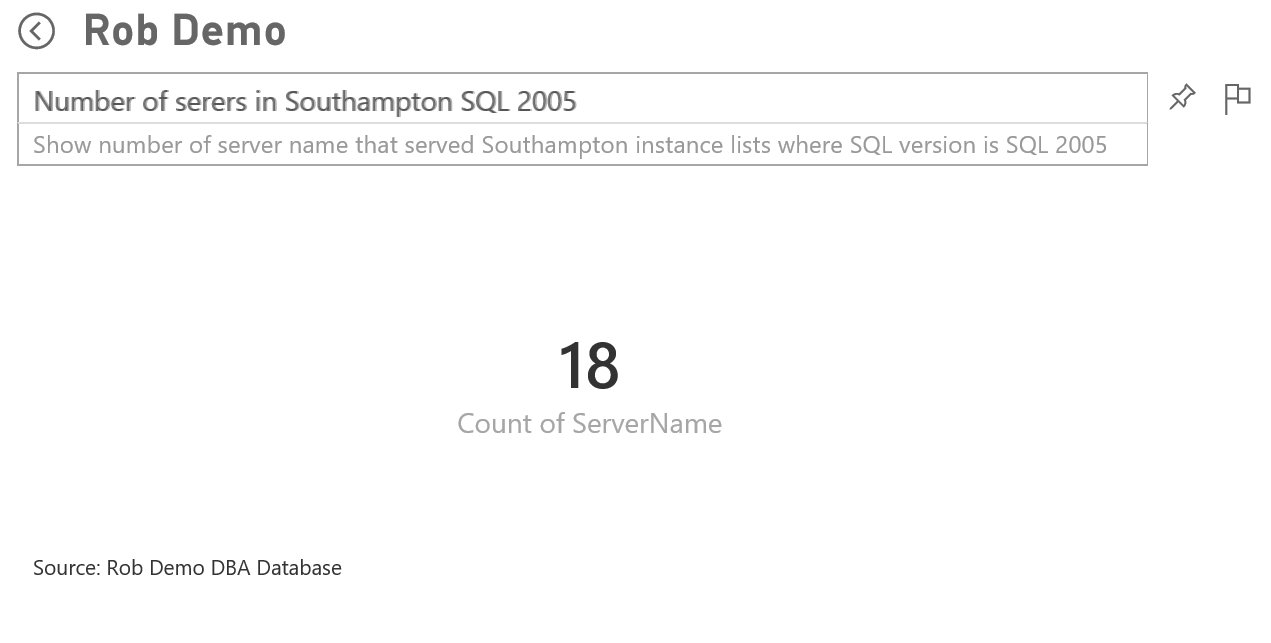 I have written further posts about this

Populating My DBA Database for Power Bi with PowerShell – Databases 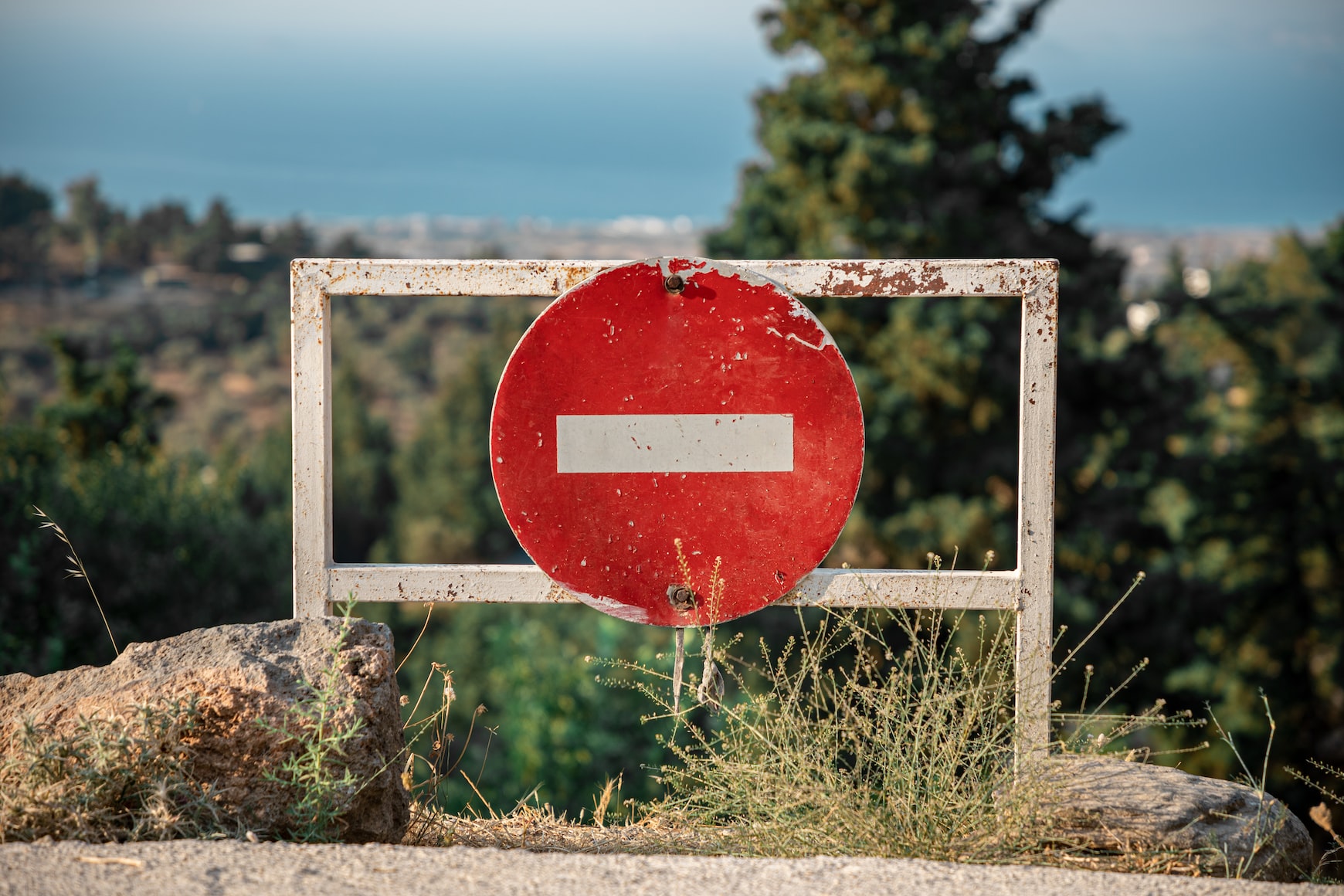