That looks awesome, I thought, so I watched the YouTube video.Scott has written a C# application that would change the scene depending on some text in the PowerPoint slide notes. Then, by applying a Chroma filter to the display capture and placing the webcam capture appropriately, when the slide changed, the Obs scene changed and the webcam became embedded in the slide!!!!!!!

It is truly awesome but it is for Obs and I use StreamLabs and I wondered if it could be done with PowerShell.

(If you just want the code, you can find it here)

Listen to PowerPoint Events with PowerShell

The first thing that we need to do is to find out when the PowerPoint Slide has changed.

You can create a PowerPoint Com Object with

and make it visible with

Get the Slide Number and Notes

Next step is to get the slide number. It is not truly required for the code, but I like to print it out so that I know which slide I was on for trouble shooting.

The notes (by looking at code) can be accessed at

then parse the notes to get the scene name which is defined as OBS:SceneName

The first part gets the first line and it was thanks to Andreas on twitch who got this working, Thank you Andreas.

Listen to an Event

With PowerShell, you can subscribes to events and take action when they fire. The event that we are going to subscribe to is called SlideShowNextSlide

We have defined an $action variable in the code but we need to provide an action and this is where things got a little tricky.

You can access services’ methods and properties by sending JSON-RPC messages to the named pipe slobs.

Create a connection and send and receive messages

Now I had everything I needed to create a connection to SLOBS via named pipes. SLOBS needs to be started here!

Next I needed to get the messages to send formatted correctly. Looking at the API docs I saw

So I was able to get the current available scenes with

Setting up PowerPoint and Scenes

With the PowerShell set up, we next need to set it up to use the scenes. I followed Scotts example and used OBS:SceneName as the reference to the Scene. I added this to the first line of the notes on a slide 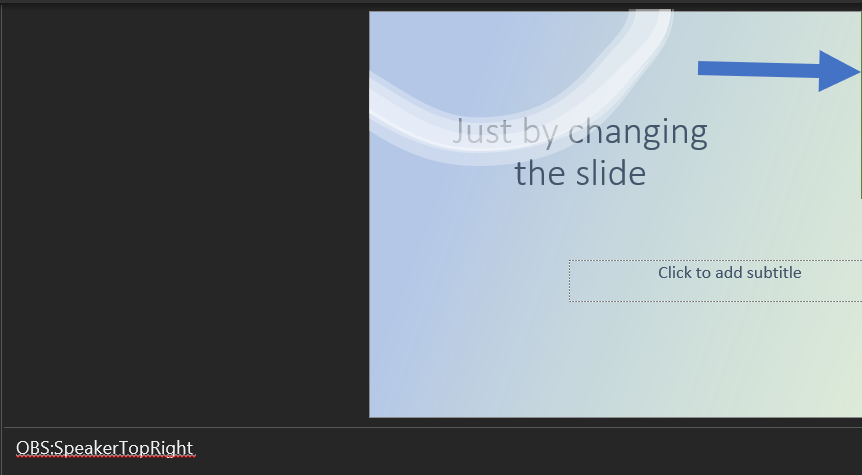 and then created a text box with a green fill

In StreamLabs, I set up the scene with the same name, the order of the sources is important. They are displayed from top to bottom, front to back so the Display Capture will be on top of the Sony Camera here

Then I right clicked on the Display Capture and chose Filters 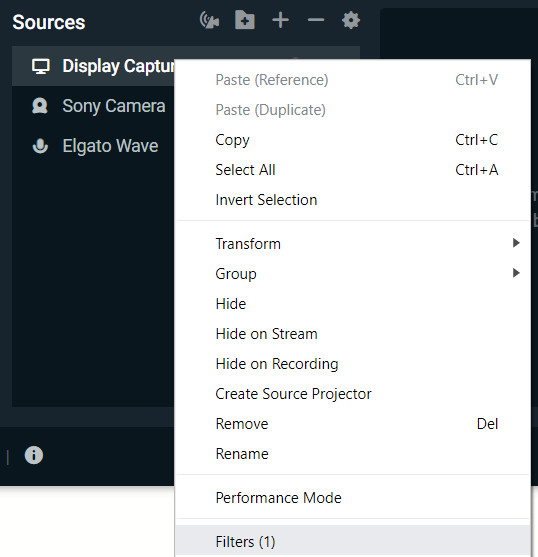 and chose a Chroma Key filter

With the PowerPoint in SlideShow mode, I set the Chroma Key filter colour to match the colour of the green box, placed the camera source in the correct location and saved.

The image below shows form left to right, the Chroma Key settings, the scene in SLOBS and the PowerPoint slideshow

Normally, I would do this on seperate screens of course!

I set up each slide like this and then I closed the PowerPoint and ran the code, you can find it here,)leaving PowerShell running in the background. This opened PowerPoint and I opened the deck and started the slide show and as I navigate through the slide, the scene changes and so does the webcam position :-)

You can see a test run below

and the demo pptx can be found here

Thank you to the ever wonderful Ben for the suggestion to blog. Check out #NewStarNovember for more blog posts.

Thank you to the ever wonderful Ben for the suggestion to blog. Check out #NewStarNovember for more blog posts.